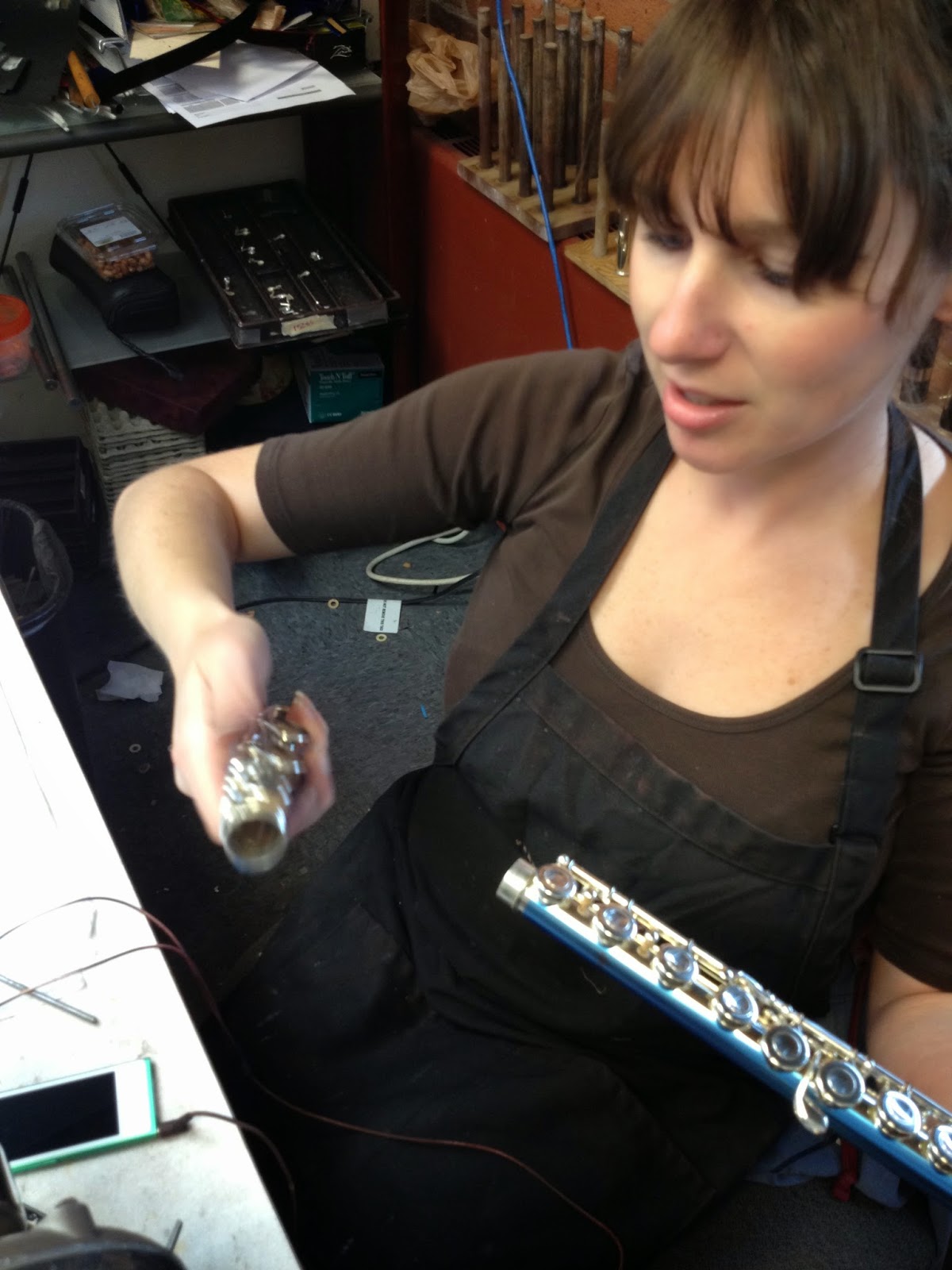 Last week, we spotted a flute in the repair shop with a strange indentation in the tenon.  The culprit for this damage was the repetitive motion of placing the flute on a stand (peg) at an angle.  That made us wonder -- what about putting your flute together?  Is there a right way and wrong way for that? What kind of damage could happen if you are not assembling your flute correctly?  So, we went to the repair office to chat with our repair technician, Rachel Baker.

Rachel assured us that there is no one particular correct way to assemble a flute and that there are actually different ways. We asked about one we had come across recently -- the "barrel and end of footjoint" method, where you place one hand on the barrel and one on the bottom of the footjoint. This method prevents people from placing pressure on the mechanism.  However, Rachel finds this method of holding the flute and footjoint at "far ends" not to be the best, because she said it is more difficult to get the flute straight this way. She told us that there "should be no angles" when you are assembling the flute -- and angles can certainly happen with this particular method because your hands are very far apart.

So, Rachel has a method that she showed us, and she explained more as she demonstrated.  She holds the flute (centerjoint) essentially in the same manner that she would when playing, and then she rotates the flute down so that her palm is holding it.  She then holds the footjoint in a very natural manner with her thumb closing a key cup toward the middle of the footjoint.  She feels that it is easier to get the flute together correctly when your hands are closer to the connection point.  With this type of position, you have more control, as opposed to the method where your hands are at opposite ends of the flute and footjoint.

With Rachel's method, her hands do touch the mechanism -- so, we asked if that would damage the flute.  She assured us that she has "never broken a flute putting it together this way," and that the "pressure" on the mechanism is actually lighter than one would normally exert when playing the flute.  In her words, "it's definitely not a death grip."

After meeting with Rachel, we took back a few key pointers about assembling the flute: (1) hands should be closer to the connection point to allow for more control (2) position of hands is similar to playing position (3) it is okay to touch the mechanism, because you will not exert enough pressure to damage anything.  Finally, Rachel told us that the footjoint should slide onto the flute easily -- it should not be difficult. She shared, "If you are having a lot of trouble putting the flute together, then something else needs to be done..."

Posted by Powell Flutes at 2:59 PM