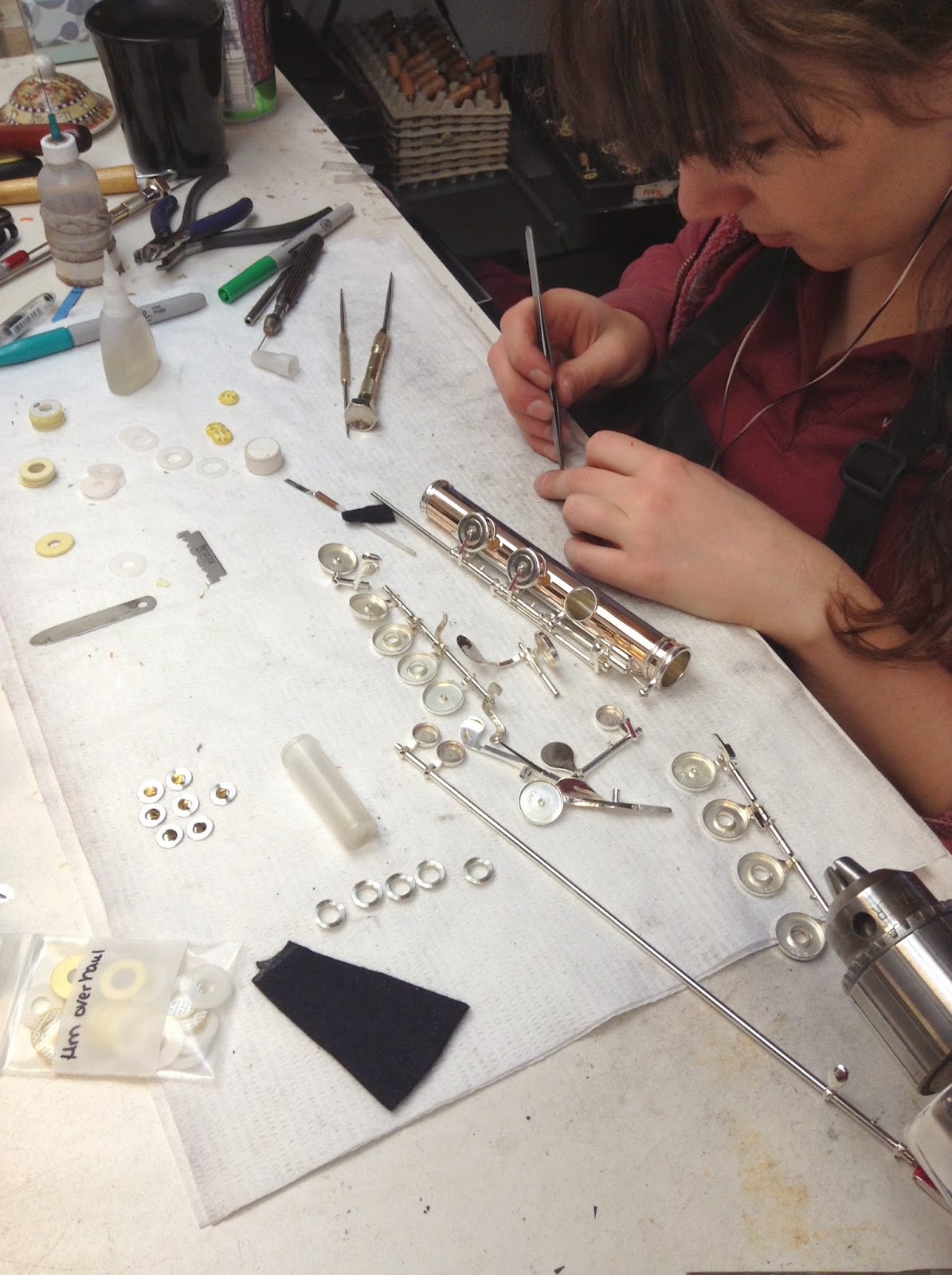 This week, we received a call from a dealer whose customer had his flute serviced by Powell about a week ago.  The dealer said that the customer had the same problem with the instrument and needed it fixed in two days.  Although we could not possibly meet that deadline because of shipping time alone, we sent out a loaner flute.  The flute arrived at the dealer -- at the very same time the customer arrived with his flute.  The customer actually had a different issue with his flute than was reported to the dealer.  The customer's mother had spoken with the dealer, and unfortunately, something "got lost in translation."  So, there was a bit of a scramble to arrange repair for something that had been repaired already!

When it comes to repair, it really is best for the flute owner to speak directly with the technician.  As we can see from the situation above, if there is someone in the middle, the wrong information can get relayed -- causing lots of confusion!  So, if your flute is in need of repair, contact the technician directly.  There's no need to feel shy if you are not sure exactly how to explain the problem -- simply explain the issue to the best of your ability.  If the repair technician has additional questions, s/he will ask for more information to make sure everything is perfectly clear.

If you do have to relay a message to the technician via a parent or someone else, try to write down exactly what the problem is with the flute.  You may even draw a diagram if necessary.  In fact, if you find it helpful to diagram the problem, you could always scan the drawing and e-mail or fax it to your technician.  You could also photograph the area in need of repair on the flute and send the photos to the technician.  When it comes to repair, it's always best to relay as much information as possible, as clearly as possible.  This will help save time and hassle -- and assure that the proper issue is addressed.

Powell has a page on it's website that lists frequently asked questions.  There is also a link on the page to e-mail our repair technician directly.  Click here to view the page.

Posted by Powell Flutes at 5:21 PM No comments:


We were recently asked, "What happens if you use commercial polish on your flute?"  Hmm...  We knew that this was highly frowned upon in our repair shop, but we wanted to know exactly why -- so we asked!

Repair Technician, Rachel Baker, gave us some insight on the topic.  She told us that the biggest problem with commercial polish is that it gets everywhere -- on your pads, corks, felts -- and then all of those parts would need to be replaced.  In the repair shop, our technician has the skill set to remove the entire mechanism from a flute, and this makes things much easier when it comes to polishing the body.  We realize that most flute players would not -- and should not -- do this (hence the mess of polish on all the "soft parts" of pads, corks, and felts).

Aside from the mess, commercial polish is also much more abrasive than the red rouge that we use here at Powell to polish flutes.  Rachel tells us that all polishes are abrasive to some degree (because that is how they work), but the red rouge here is extremely fine in terms of its abrasiveness.  She said that commercial polishes are not only more abrasive, but they also require that you "rub really hard."  Rubbing so vigorously with an abrasive polish leads to more scratches on your flute.

Finally, when it comes to polishing, equipment is just as important as materials.  Here we have red rouge, and we also have polishing wheels -- which rotate at an extremely high speed.  There's really no way a person's hand can compete with the speed of a polishing wheel, and the results speak for themselves!  (Click here to read our previous post on polishing.)

To summarize the answer, if you use commercial polish, you risk damaging parts of the flute and scratching the body.  Repair technicians using much finer polish (like red rouge) and high speed polishing wheels will be able to polish the flute safely and produce the best possible shine.  So, as tempting as it might be to put over-the-counter polish on your flute, it's best to resist the urge.  Keep your flute clean by wiping it with a plain, microfiber cloth after you play -- but leave the polishing to the pros.  Don't forget that when you send your flute in for a COA, polishing is part of the process!

Posted by Powell Flutes at 1:32 PM No comments:

Flute in the Car?

Have you ever woken up in the middle of the night, realizing that you left your flute in the car?  If this has happened to you, you are probably not the only one.  In fact, we had this question come up recently.  We were asked, "What exactly could happen if I accidentally leave my flute in the car overnight on a very hot day or very cold day?"

Well, obviously, you don't want to intentionally leave your flute in the car.  We hate to think about flutes being stolen, but leaving it in the car raises that risk.  Meanwhile, there are certain complications that may arise due to temperature -- since exposing your flute to extreme temperatures for long periods time is never a good thing...

So, if you've left your flute in the car in very hot temperatures, any glue used on the flute can get "gooey" and shift.  This would be the case with glue used to hold adjustments and for the shellac used to seat pads that are "floated" (C1 and trill keys).  Also, the skin on pads has a bit of natural moisture, so in very high temperatures, this skin could dry out a bit and become brittle.  It's also be possible that the headjoint cork could dry out as well.

Extreme cold poses the greatest risk to wooden flutes, as we know.  In cold temperatures, there is usually a lack of humidity, so cracking is a major risk.  Just as high temperatures cause issues with pad shellac in terms of drying it out, cold temperatures may cause the shellac to become brittle.  In both instances, this would lead to pads falling out.  Powell's Repair Technician, Rachel Baker, tells us that many repair technicians see piccolos with pads falling out during marching band season, "because people are out marching in the cold."  We realize that not everyone will be marching in a cold climate, but if you are, there is definitely a risk for piccolo players -- because all their pads are held by shellac or some other type of pad glue.

We understand that situations happen, but in terms of leaving your flute out in the car, Rachel assures us that it won't "disassemble itself."  She said, "If the temperature is 400 degrees Fahrenheit, you will have problems, because any soft solder would melt -- but if you are in 400 degree heat, you have bigger problems..."  Finally, Rachel said that when you do pick up your flute after it's been left out, if it "just doesn't seem to be playing right," make sure to call your repair tech!

Posted by Powell Flutes at 4:53 PM No comments:

Plug-Os can be very helpful for many people, but what if it does not fit?  Is this possible?  Actually, it may be the case for some Powell Flutes, but there is definitely an option in this situation...

Powell's Repair Technician, Rachel Baker, shared a customer inquiry with us this week.  She said the customer wrote, "I purchased Powell Plug-Os, but they don't fit.  They are too small.  Do you have any recommendations on what to do?"  Of course, Rachel had a recommendation, and it is very simple.  If you order Powell Plug-Os®, and they are too small to fit, you can order the Sonaré Plug-Os®, which are slightly larger and should fit.

So, why would a Powell Plug-O not fit a Powell flute?  Well, some Powell flutes, particularly those made in the 1960s and 1970s, have French keys with holes that are slightly larger than French keys on today's Powell flutes.  Why is this?  Rachel tells us that designs simply change over time, and that is the case here.  She also said it may be hard to tell what size you need, but both the metal Sonaré Plug-Os or silicone plugs will be 9mm in diameter, and the Powell Plug-Os (and plugs) will be 7mm in diameter.  If you are thinking of ordering Plug-Os, Rachel recommends ordering the Powell Plug-Os.  If they don't fit, you can simply return and exchange them for the Sonaré Plug-Os.  Both types of Plug-Os are available directly on the Powell website in the VQP shop at https://powellflutes.com/vqpshop/plugs-plug-os.

Posted by Powell Flutes at 3:35 PM No comments: